There was never a doubt that Rahm would learn an enormous amount in school. I was proud, but unsurprised, when Rahm came home from SSDS talking about a “chrysalis,” a fact we had somehow neglected to discuss at home despite many readings of The Very Hungry Caterpillar. This was the sort of thing I had expected him to come home with, and in the past year, I have not been disappointed. Rahm is a quick learner and SSDS makes sure he has plenty to learn. Our expectations entering SSDS were that Rahm would find new and exciting things to learn, surrounded by dedicated educators. However, in reflecting back on the past year, SSDS has given Rahm and the rest of our family so much more, and we are the richer for it. 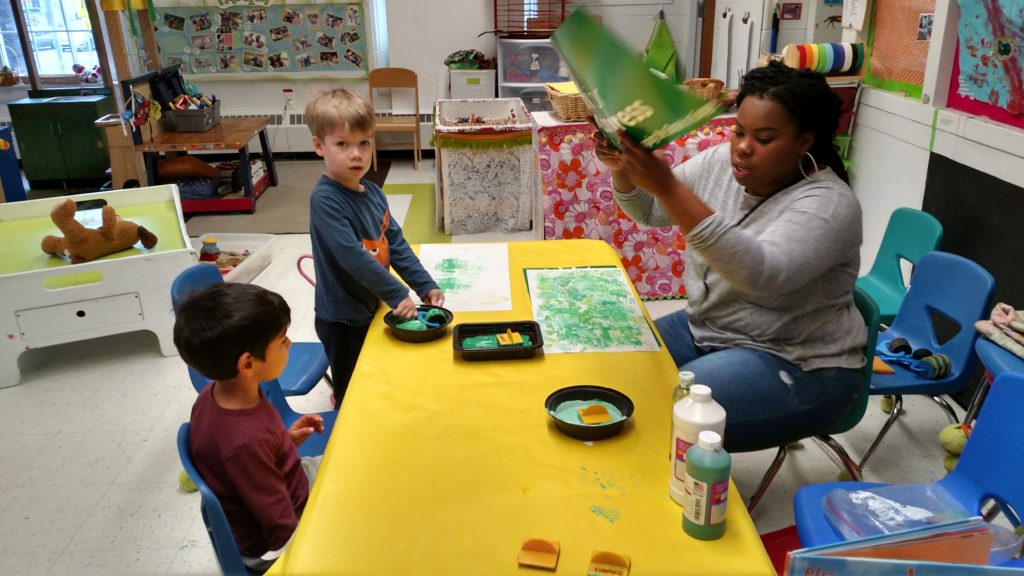 Rahm and Graham make art with Ms. Jerri at drop off for Ms. Beth’s 3’s

Rahm’s teachers have cultivated our son’s natural talents and interests in ways that have often impressed me. One morning in particular I recall Ms. Michelle, in Rahm’s Add-A-Day program, telling Rahm that she had gotten out a counting puzzle especially for him. Puzzles and counting both being high on Rahm’s list of things he enjoys. A little thing to be sure, but demonstrative of how each teacher is attuned to each child. The two of them spent time one-on-one doing a puzzle. Coming from a nanny-share, one of our fears had been that Rahm might feel lost in the crowd. Instead, he has been given dedicated attention and built a new set of meaningful relationships with his teachers. This rapport has made drop-off far easier than I ever would have expected; by enticing Rahm with activities tuned to his likes, I often hardly get a “Bye!” before he is engrossed by an art project or some other activity. The year at SSDS has been accompanied by leaps in development. Amongst other fun new skills, he has a new-found ability to write his name, an eagerness to wash hands (something that used to be a fight), and a sense of independence. This last characteristic in particular highlights yet another unexpected, and much appreciated aspect of Rahm’s time at school: the impact on our home life. Through missives home and solid communication, Rahm’s teachers have provided ways to continuously reinforce and strengthen the behavioral, social, and emotional skills that Rahm has learned in school. Prior to SSDS, it was easy to do everything for Rahm, but through deliberate use of techniques from school, Rahm’s independence is beginning to blossom. We use “safe hands,” make “thumbs-up choices.” We use timers and songs to persuade. Rahm has his very own “big job” to start the dishwasher every evening. Pretend glue now sticks Rahm to his chair at dinner. Every change is little, but together, they are a testament to the growth and development fostered by the school for which we were unprepared but grateful.

Bit by bit, then, SSDS has infused itself into our life. Whether because of spending time co-oping in the classroom, chatting in the hallways, or just reading parent emails, SSDS has offered us an unexpected community. Even if we do not have regular playdates with other families in Rahm’s class, we feel like we are part of a group. We have camaraderie, we can talk through any issues. We have support if and when we need it—it’s comforting.

The SSDS community we have become a part of has even come to merge itself with our existing nanny share care network. Our nanny has been welcomed into the SSDS community as well. We have heard second-hand about parents helping our nanny carry car seats through the doors as she negotiates with a strong-willed one-year old and our infant. We have seen the photographic evidence of the support she has received from SSDS parents as she uses unending wells of patience to coax milk from a bottle into our stubborn four-month old. This, at last, is perhaps what I expected least and appreciate most: SSDS has proved to be a community committed to the growth and development of all its children, molding itself to bring out the best in the child, parents, and caregivers who already care so much.

As a parent new to SSDS, it is easy to reflect back on the past year and be startled by how much has changed in our life without realizing it. Our fears about having a second classroom and teacher pair for Add-A-Day, Rahm not liking school, or our nanny not being welcomed as our proxy seem unfounded and distant. We have gladly been embraced by a community of skilled teachers and administrators. We can’t wait for the next school year to begin!